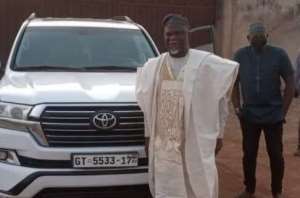 Information reaching this portal indicated that the first National Vice Chairman of the National Democratic Congress (NDC) Chief Sofo Awudu Azorka has been robbed of his V8 vehicle.

The white V8 with registration number GT 5533-17 was robbed at gunpoint at his residence at Gbanyamli, a suburb of Tamale, on February 28, 2022.

The Northern Region Crime Officer, Supt. Bernard Baba Ananga, who confirmed the incident to DGN Online said the owner of the vehicle Chief Sofo Awudu Azorka reported the case to the police.

According to him, Sofo Awudu Azorka said on February 28, 2022, he drove to his residence at Gbanyamli and that when he got to his gate, an armed man approached to attack him but he escaped leaving the vehicle.

He indicated that when he returned to the main gate the vehicle was nowhere to be found.

Supt. Ananga appealed to residents of Gbanyamli and its surroundings to provide credible information that will assist the police to arrest the perpetrator.

In recent times, car snatching has gained notoriety in the northern regio and residents are calling on the security agencies to adopt measures to curb the menace.