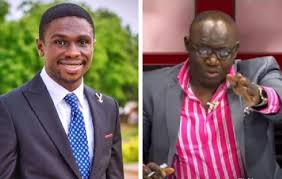 Kwaku Annan has launched a fresh attack on IGP’s lawyer

He stated that, his days are numbered

Lawyer Sammy Darko has requested for substituted service from the court

Justice Kwaku Annan, the Net 2 TV presenter dragged to court by the former IGP, David Asante-Apeatu, has threatened the former IGP’s lawyer, Sammy Darko, stating that his days are numbered.

He was reacting to media reportage that lawyer Sammy Darko had prayed to the High Court-General Jurisdiction 8, presided over by Justice Ekow Baiden, to grant him a substituted service for a judgment in default of defence, but the judge asked him to slow down and follow further processes.

“Look, I know that rule of law works in this country…but the conceived naked evil that an individual wants to commit and when you appear before a judge who knows what he is doing and you refuse to do the right, you will be exposed just like today, someone has been exposed. Have you seen you have been disgraced?”

The TV presenter managed to drag investigative journalist, Anas Aremeyaw Anas into the conversation because the IGP’s lawyer, also doubles as one of the lawyers for the journalist.

“Anas Aremeyaw Anas, I have told you that you and your surrogates like Sammy Darko and the rest; I told you, you can’t rise from … where you have gotten to until you render an unqualified apology to the whole country called Ghana.

“The time is not right for me to descend into the gutters with you but I swear (to) God and I have said it here that until death do us part; until Ghanaians know that I speak the truth…you can go and hide behind some prominent people in the society, we are all under the law and not above it…any attempt, any move, any machination with the intention of scaring some judges just to have your way, it will not wash. Your end has come and you must subject yourself to the rule of law…,” he said.

Justice Kwaku Annan continued: “You, Sammy Darko from Joy FM to BBC and now you say you are a lawyer, five years in practice so, you are the master of the law; you? Massa, don’t let me descend heavily on you, Sammy Darko. My goodness, the cheek of it. You, Sammy Darko, when did you become a journalist and when did you enroll in law school; I’m asking you. Massa, I’m human and you can’t disgrace me to this extent and go freely. At the time that we were waiting for you to serve us here [referring to his media house] with your summons, you didn’t bring it.

“For one month, you were not able to serve me with the summons, yet you were all over social media disgracing me. Don’t I have a mouth to speak? And you were on social media with the summons ranting. I said I will not speak about the story today, let’s finish with the court process and when we finish, that is when you will see. I’m not through with you guys, when we finish that’s where you will see where you will end. Or do you think you can live in this country and control it anyhow, no. It won’t work.

“Your days are numbered” he stressed, “Sammy Darko, you say you are a lawyer. I don’t want to waste that time with scavengers and unscrupulous beings that claim to have been to the law school and understand the law. It’s so annoying, when you listen to these people and how they want to operate…but the time is counting on you guys…”

The High Court-General Jurisdiction 8, presided over by Justice Ekow Baiden, is hearing a case of defamation brought before it by a former Inspector General of Police (IGP) David Asante-Apeatu against Net 2 TV’s Justice Kweku Annan.

As reported by the New Crusading Guide newspaper, there was drama in court on Tuesday, December 7, 2021, when lawyers for Asante-Apeatu, led by Sammy Darko, attempted to move an application on notice for judgment in default of defence.

The judge eventually told the former IGP’s lawyer that he is a small boy at the bar and that he should slow down.

Judge Ekow Baiden retorted, “You seem to be in a hurry to finish this case.”