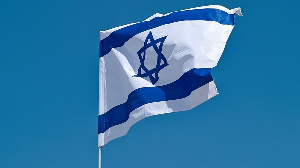 Related Topics:BLACKLISTCOVID 19ISREAL
Up Next

Germany’s planned deportation of 25 Ghanaians: All you need to know