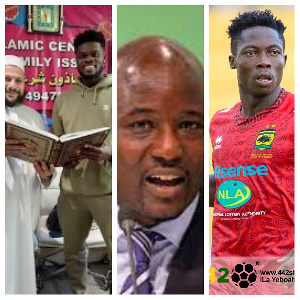 Stories of religious conversions are not new in the sporting world. Throughout history, sports personalities have crossed carpets from Christianity to Islam and vice versa.

The most popular of them all perhaps is the conversion of boxing icon Cassius Marcellus Clay to Muhammed Ali.

Here are four Ghanaian footballers who converted to Muslim

Thomas Partey is the latest to walk the path of dropping Christianity for Islam. The Arsenal midfielder gave life to rumors when he confirmed that he has moved from Christianity to Islam.

Partey says he converted because of his Moroccan girlfriend who is named Sara Bella. Partey reportedly married the lady at a private ceremony in London.

Partey has adopted Yakubu as his Muslim name.

The former Black Stars player converted to Islam during his playing days. His Muslim name is Abdul Hafiz.

He is a former president of the Professional Footballers Association of Ghana and a former Deputy General Secretary of the Confederation of African Football.

The Asante Kotoko midfielder is reportedly a Muslim. According to Ghanasoccernet, Justice Blay had his conversion in 2018.

He made the conversion when he was with Medeama Sporting Club in Tarkwa.

The former Inter Allies goalkeeper reportedly converted to Islam in the same year as Justice Blay.

442GH captured the report as him being a Christian but converting to Islam due to his new beliefs.

He has since moved on to Kumasi Asante Kotoko.

Previous Comair to be liquidated
Next Will Ramaphosa step aside? Pule Mabe explains