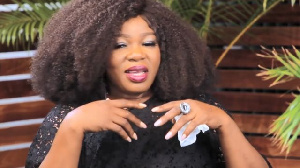 Nigerians react to the death of actress, Ada Ameh

Following the death of actress, Ada Ameh who passed away on Sunday, July 17, several fans around the world have taken to social media to express their sadness.

Ada Ameh was reported to have slumped and rushed to the hospital in Warri where she was pronounced dead.

Many had nice things to say about the actress who was known for her role in the television sitcom, ‘The Johnsons’.

Prior to her death, Ada Ameh in an interview spoke about her battle with depression after losing her only daughter to death in 2020. She also lost seven family members which includes 3 brothers, 3 sisters and her father,

The actress noted that she has been battling grief and mental health issues due to these deaths.

Reacting to her death, fans and loved ones have shared their thoughts on her amazing talent as an actress and her personality.

Some described her as a bubbly person filled with love and laughter.

Nancy Isime: My heart is so heavy, I don’t even know what to say one of the people I look up to in the film industry Rip aunty Ada Ameh. I’ll miss you so much

Alex Agbo: I’ve never wished for a story to turn out false like this story about Ada Ameh’s death!

Do2dtun Energy gAD: Ada Ameh’s death is so painful. One of My fav on The Johnsons especially when she says “a lucky lo lo” “Apor” .. she just lost a child and her now.. May God put us through our tough times. This one is very painful

Oriflameskincareng: I watched The Johnsons everyday by 5pm when I was going through hell and no one knew.Ada Ameh,Lucky and Efe always made me laugh to the extent that I checked their individual IG page.
There’s nothing I can say that can bring you back to life.I love you so much RIP

STUDENTCONNECT: Ada Ameh didn’t deserve to go through this . Losing her siblings, her daughter is heartbreaking. We lost our famous The Johnsons actress, I wonder how Empress Njamah will be feeling rn

Saskay: I met this woman once on set and she was so sweet like she had known me before. All I could think of was the grief she was experiencing, cause I had seen several videos where she spoke about her mental health. This is really sad
Rest well Ada Ameh

Read some posts below;

Tags actress ADA Ameh DEATH nigerians OF REACT THE to

Previous PHOTOS: Ghanaian celebrities who have admitted to ‘fixing’ their bodies
Next AirtelTigo Customers on a winning bonanza in the “To Gu Me So” Reloaded Promo