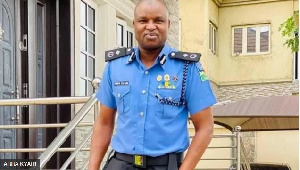 DCP Abba Kyari could be facing possible demotion to the rank of Assistant Commissioner of Police (ACP) following a recommendation by the DIG Joseph Egbuniike-led Special Investigation Panel (SIP).

The recommendation for his demotion comes after he was found culpable of fraternising with criminals and fraudsters most notably Hushpuppi which is against the ethics and conduct of the Nigerian Police Force (NPF).

The panel also said the embattled police chief was found guilty of violating the social media policy of the Nigeria Police Force as he reacted to the FBI’s allegations on his Facebook page without notifying the force.

However, on the claims of bribery made against Kyari, the panel noted that there is no evidence that any proceeds of suspicious financial deals were traced to his account.

SIP stated in its latest report: “The evidence of bribe is circumstantial since it was not proven that the bribe was paid into the officer’s account nor was any proceeds of the bribe traced by the panel much less linking the officer to any such proceeds.’’

It will be recalled that the office of the Attorney General of the federation in his legal advice of the Police report, disclosed that a prima facie case of fraudulent involvement was established against Abba Kyari but that the report was watery and can not be used in court to nail him, Vanguard reports.

“That there exists a prima facie case of conspiracy, collaboration, receipt, conversion, transfer and/or retention of proceeds of unlawful activities contrary to the provision of Section 15, 17 & 18 of the Money Laundering (Prohibition) Act, 2004 and Section 17 of the Economic and Financial Crimes Commission (Est) Act, Cap EI Laws of the Federation of Nigeria, 2004 against DCP Abba Kyari and other suspects in view of the overwhelming evidence showing the nature of his disguised financial transactions and activities Ramon Abbas (Hushpuppi) and others.

A senior Police source further disclosed that the force has begun further investigations into Kyari’s alleged involvement/links in money laundering deals of gangs as directed by the Attorney General of the Federation, Mr. Abubakar Malami.