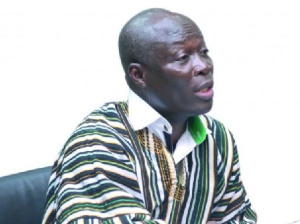 The Member of Parliament for Odododiodio, Nii Lante Vanderpuye, has thrown his weight behind the anti-LGBTQ+ bill. He said men will not be allowed to marry their fellow men nor women be permitted to marry their compatriots in Ghana.

“We will not allow a man to marry a man and a woman to marry a woman. The Chiefs are seriously against it. They have said if the bill is not passed, I should not come back to the constituency.”

“I support it 100%. A lot of my constituents support it although that behaviour is pervasive in my area. I have been chosen as the leader of my people so anything that is an affront to the norms and traditions of my people, I will talk about it.”

He said his opposition against the bill is legitimate, given that Ghana’s norms and traditions do not condone LGBTQ+ activities.

“My interest is not just because I want people arrested. My interest is to stop this negative and antiquated behaviour. I do not know which Ghanaian culture is LGBTQ. It is an attitude people pick up. I do not know where they pick it up from because it is not part of our culture. I am saying you can do that in your bedroom, but we will not allow that into our society” the legislator said.

“Just yesterday [Monday], I reported a profane song to the Police. The song which is called oy3 s3k3, [meaning you are insane in Ga], makes people go naked when it is played. Guys and girls go naked and dance.”

The bill currently before Parliament seeks to criminalise and impose jail terms on lesbians, gays, bisexuals, transgenders and queers (LGBTQ+) and people who promote such activities in the country.

But a group made up of academics, lawyers, researchers, civil society organisations (CSOs) and human rights activists have kicked against the bill .

The have decribed the bill as a flagrant violation of the 1992 Constitution, as it seeks to curtail freedom of expression and the media, the right to assemble and the right to join any association of one’s choice.

According to the group, the bill — Promotion of Proper Human Sexual Rights and Ghanaian Family Values Bill — when passed into law, would erode fundamental human rights, as enshrined in the 1992 Constitution, and send Ghana to the dark ages of lawlessness and intolerance.

The group, made up of 18 members, has already submitted a 30-page memorandum to Parliament, detailing what it described as the unconstitutionality of the bill.

Meanwhile, religious bodies in the country and traditional leaders are in support of the bill which they said will preserve the culture of the country.