Home / OPINION / Noise Pollution and why you need to listen to this! 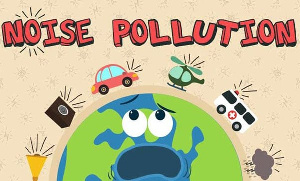 Noise Pollution and why you need to listen to this!

What do you think of when you think of noise pollution? In a country such as Ghana, one of the first things that may come to mind may perhaps be the loudspeakers of your neighborhood church or mosque, or perhaps the near-perpetual lack of quiet at the more central lorry stations like Accra-Circle and or Tudu.

If you decided to jump continents and countries and found yourself in say, Switzerland, you would find quite quickly that the seemingly mundane and habitual act of flushing your toilet may get you very harshly told off by your fellow apartment building cohabitants, or your landlord or landlady. Apparently, in Switzerland, any flushing between 10PM and 7PM is considered much too loud and classified as a disturbance and noise pollution.

YOU READ THAT RIGHT. GOOGLE IT! I wouldn’t have known about it if it hadn’t happened to a close friend of mine.

The pollution that noise causes have crept up on Ghanaians so swiftly and for so long that we often do not even think about it anymore. It often appears to be the unavoidable by-product of development and industrialization.

Businesses and business-like activities are popping up around residential areas like mushrooms growing overnight. In most cases, however, these businesses are not predominantly the cause of any (direct) noise by way of their professional operations, with the exception of some cases. Thing is, there is a great deal of associated noise, such as traffic they bring along both automobiles and pedestrians.

Some of the main causes of noise pollution in Ghana today involve:

•Industries, Companies and Business-like activities in and around residential areas both in Accra and around the country;

•Street funerals! These are ad hoc funerals that occur in Ghana’s cities. During these funeral processions, large loudspeakers are mounted, music is blasted for hours on end, usually extending from the day into well into the night (or the wee hours of the morning), and roads are blocked for an unspecified amount of time (usually lasting not more than 20 hours at a go);

•Religious processions! Typically, mosques (places of Muslim prayers and religious gatherings) in Ghana tend to mount megaphones on their buildings with the purpose of being able to reach wide areas and sizeable numbers of worshippers with their messages and prayers. In the spirit of religious tolerance, this practice is entirely acceptable. Nonetheless, it may be worth mentioning that it does toe the line of the subject matter, whether the locals are or aren’t religious;

•Communal churches! Much in the same way as the mosques conduct their processions of faith to the wider populations around them, churches in Ghana equally have a penchant and a history of very high decibels emanating from their buildings. These moments usually occur on Sunday mornings well into the afternoon, but night services on weekdays (especially Fridays) tend to play an equal role.

If we are being honest with ourselves, the sort of noise pollution we experience in Ghana can indeed be a tad unnerving. But putting our emotions aside, is it perhaps in any way harmful to us?

Does noise pollution in Ghana impact our health?

We have been exposed to heightened decibels (of sound) for so long that we have drifted into a place of not even thinking of it much, beyond complaining about the momentary inconvenience it may cause us from time to time. The Center for Disease Control (CDC) states that sound decibels above 70 decibels for prolonged periods can cause damage to our hearing.

For the purpose of some context in the matter, a typical motorbike engine runs at circa 95 decibels; take this information and juxtapose it with your local street funeral or other similar gatherings, especially ones done on regular basis.

Noise pollution has been studied and determined to cause a myriad of health concerns including loss of hearing, stress, high blood pressure, heart disease, sleep disturbances, and so on. National Geographic had the following to say on the health impacts of noise pollution:

These health problems can affect all age groups, especially children. Many children who live near noisy airports or streets have been found to suffer from stress and other problems, such as impairments in memory, attention level, and reading skill“ (Noise Pollution | National Geographic, n.d.)

The same decibels of noise that cause heart disease, high blood pressure, stress, impaired hearing, and so on, are the same that affect most of Sub-Saharan Africa.

Nigeria is a notable exception because things such as the population size, the relative degrees of industrialization, and the more perverse use of generators give an unusual and notably upward spike in both the data and the severity and frequency of these aforementioned negative health effects.

More on the actual data-backed severity can be read in this study, the full reference is below this article, from the National Center for Biotechnology Information. It highlights effects ranging from negative impacts on fetal development (in pregnant women) to other severities such as type 2 diabetes incidents.

A synopsis of a 2019 Study of Noise Pollution Measurements and Possible Effects on Public Health in Ota Metropolis, Nigeria, by the US National Center for Biotechnology Information.

“A look at the literature showed the abundance of evidence of the adverse effects of noise pollution on the general public health. The worsening situation of noise pollution is that it has not been upgraded to the level of the other forms of pollution.

Other auditory and non-auditory effects of noise on health are myocardial infarction incidence, peptic ulcers, and disruption of communication and retentive capabilities in children.

“If we should take anything from this study, it should be that the growing issue of poorly managed noise pollution in Ghana is obviously not an isolated case. Whether or not hard data exists on this claim, we can easily ascertain at least one salient truth, which is that Sub-Saharan Africa is on the rise. Several countries on the continent are undergoing rapid and/or steady industrialization and economic growth. This immediately means that more places will be populated and commercialized, and more uncontrolled noise will be generated. This trickles down to mean that we can also expect to see an increase in noise-related health complications as a direct and indirect result (of this).

How might we make things… quieter?
One of the first steps to making our cities and environs quieter would be for more city planners to work with environmentalists to plant more trees, for instance. Studies show that trees planted by and behind highways and major roads can reduce noise by as much as 12 decibels. A very recent op-ed, published in March 2022 by the UN Environment Program (UNEP) Executive Director, Inger Andersen, corroborates the above with his statement”

“…However, research makes clear that natural sounds, emanating from green urban spaces, can offer various health benefits. In some cases, vegetation in urban environments can absorb acoustic energy and diffuse noise. Tree belts, shrubs, green walls, and green roofs not only help amplify natural sounds by attracting wildlife but improve the visual streetscape as well. While the ultimate solution to noise pollution is its reduction, rows of trees planted behind highways have been reported to reduce noise levels by up to 12dB in certain locations. City planners should take both the health and environmental risks of noise pollution into account.

Good measures have been applied already in urban areas across the world: from London’s Ultra-Low Emission Zone, “noise radar” in Paris, and Berlin’s new cycle lanes on wide roads to Egypt’s national plan to combat noise and Pakistan’s 10bn trees “tsunami”. (The World’s Cities Must Take on the Cacophony of Noise Pollution, 2022)

Conclusion
I believe through all this information and data, as well as the sheer attention this topic has received (from the likes of the World Health Organization, the Centre for Disease Control, the United Nations, and many other credible and notable sources), though the majority of us may not think of these things often or at all, noise pollution is an important matter that may cause us irreparable harm if left unsolved and unattended. It may be time we thought collectively on these matters as a nation and as concerned citizens. Where we welcome the high decibel sound, such as with religious groups, maybe we can reduce adverse effects with any of the recommendations stated, like planting more trees in the vicinity?

Noise pollution is very present, and it is time to listen!
I hope you enjoyed the read. Hit me up and let’s keep the conversation going! I read all the feedback you send. Also, feel free to throw at me topics you’d like to read or hear my thoughts on. You can always head to my Calendly to schedule a quick chat by going to calendly.com/maxwellampong. Or connect with me your own way through my Linktree: https://linktr.ee/themax.
These are all facts. And this has been an opinion piece.

Tags AND listen NEED NOISE POLLUTION THIS to WHY you