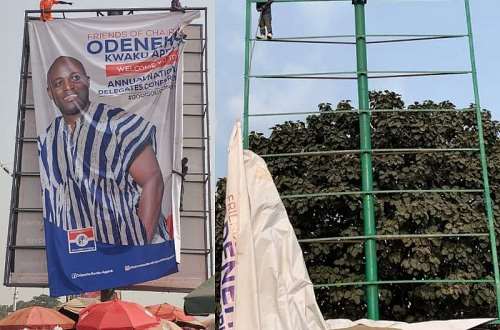 The camp of soon-to-be Ashanti Regional Chairman of the governing New Patriotic Party (NPP), Odeneho Kwaku Appiah, aka Chairman Coka has pulled down giant billboards it mounted ahead of the party’s National Delegates Conference in Kumasi.

In line with the directive of the Party, Friends of Chairman Odeneho Kwaku Appiah have taken steps to remove all mounted billboards that have his image.

Giant billboards mounted by the camp of Coka at Amakom, Anloga junction, Tech, Oforikrom, and other major streets within Kumasi have been removed.

In a statement issued by the COKA team indicates, it noted that “We are also by this very action notifying all well wishers to abide by the party regulations on this conference by not bringing T-Shirts and any other fashionable item branded with the image of Chairman Odeneho to the conference.

“It is hoped that our collective effort will make this conference successful and that we will collectively uphold the image of the Party now and after the conference.

“The move is in relation to a directive from the leadership of the NPP for all campaign billboards mounted close to the venue of the conference and within the greater Kumasi area to be removed.”

Ahead of the conference, however, billboards and banners of persons seeking to contest key positions in the party have been erected by major streets and interactions within Kumasi.

The party issued a statement a couple of days ago warning against these developments and wants, billboards erected, scrapped out.

The party in a statement said the 2021 National Annual Delegates Conference was a time of renewal for the party and that though it cherishes the party tradition of democratic competition, the leadership believes well-meaning aspirants will appreciate the need for such measures, which are necessary to enable a clear focus on the aims of the conference.

Despite billboards of other potential aspirants are still being displayed along the principal streets of Kumasi, the camp of Coka (Afigya Kwabere South NPP Chairman) said they remain law-abiding party members.

A position like the Ashanti Regional Chairmanship of the NPP has already split delegates and supporters in the region.