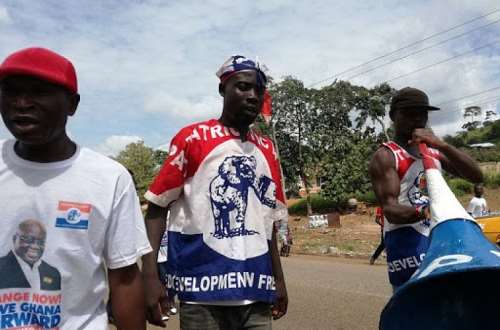 Ahead of the New Patriotic Party’s (NPP) national delegates conference on December 18, 2021, the party has issued a statement giving instructions on how it intends to organize the event.

The has warned that branded T-shirts or any other paraphernalia with the portraits and names of individuals, shall be allowed within the precincts of the conference to be held at Heroes Park in Kumasi.

A statement issued by the NPP Communications Director, Buaben Asamoah stated, “…….no t-shirts, flyers, brochures, and or souvenirs, branded and or embossed with the portraits and names of individuals, shall be allowed within the precincts of the Conference, including but not limited to places of accommodation for delegates. Any person, with or without their consent, whose image is flaunted on any advocacy material and who does not take active steps to desist from any public displays of aspiration for position within the precincts of Greater Kumasi, runs a higher risk of disqualification in the event nominations are declared opened.”

However, General Secretary of the party, John Boadu has disclosed that the President is exempted from the caveat.

In an interview with Kwame Tanko on Angel FM’s flagship program- Angel today, Mr Boadu said the party will only admit persons with the President, Nana Akufo-Addo’s paraphernalia and or T-Shirts and party colors into the conference grounds.

“……prior to our national conference in Cape Coast in 2016, we issued a similar statement and so I don’t see anything new here. If you’re a supporter and you’ve Adu Boahene, Kuffour and Akufo-Addo’s T-shirts or party colours, you can wear them. But individual contestants’ campaign materials are what we’re against.”

When asked whether or not the Vice President’s paraphernalia will be accepted, Mr John Boadu who appeared to have been ambushed with the question said:

“ ……. well, maybe, because he’s the Vice President but if possible do away with it. I think the party will be strict in this directive.”

John Boadu however assured that all is set for the event which begins with a Muslim prayer on Friday at the Central Mosque.