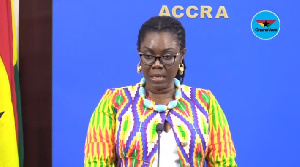 Parliament in chaos over voting on E-levy

Renowned economist and founding member of the governing New Patriotic Party, Kwame Pianim, has dismissed assertions by Communications Minister, Ursula Owusu-Ekuful that anyone who makes a mobile money transaction that exceeds GH¢100 is not poor.

Kwame Pianim says the statement by the minister is blank as it does stipulate whether the amount is the person’s income.

“You sit down and say that someone sending GH¢100 is rich and must pay e-levy, what if the person’s turnover is the GH¢100. What is the profit on that amount? For instance, if someone earns GH¢5 per day. Multiply that by 30 and you will get GH¢1500, divide that by six and you will get $20. That is the person’s earning for a month and she claims you are not poor?” he quizzed.

Kwame Pianim criticized Parliament not showing concern about the plight of Ghanaians.

He said that the 2021 Appropriations Bill for the 2022 fiscal year was approved by the house because they will benefit from it.

“When they get to Parliament, do they know what poverty is? We pay them well. Parliamentarians benefit from expenditures so is that why they approved the appropriation.”

Ursula Owusu-Ekuful on November 18 said government was right to impose charges on mobile money transaction as the sector has become a ripe one for movement of money.

“So if you really are poor and you are in a position to send a GH¢100 a day, then we need to re-classify our definition of who really the beneficiaries of these are. And it is only the sender who pays, not the recipient. Unlike the telcos where both the sender and receiver pay.

Meanwhile Parliament has suspended deliberations on the levy that will see Ghanaians pay a 1.75% charge on any electronic transaction that exceeds GH¢100.

The house has deferred voting on the matter to January 18, 2022 when it resumes sitting.