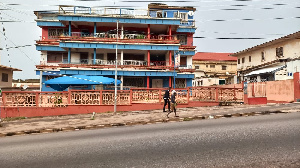 The Ashanti Regional office of the New Patriotic Party, (NPP) at Krofrom has been locked up by the owner of the property.

It will be recalled that the landlady and some family members stormed the party office some months ago to lock it up over the failure of the party to pay its rent.

The landlady during the incident said the NPP Ashanti branch headed by Mr Atwi Boasiako well known as Chairman Wontumi had refused to pay her 3 years rent arrears of an amount of Ghc36, 000.

The case forced Wontumi, the Ashanti NPP Regional Chairman to tour various radio and TV stations to debunk the landlady’s claim. He said the party had paid all rent arrears and was going to sue the woman for defamation.

After the earlier action, there were several meetings between the said landlady, some family members and Ashanti Regional Executives of the governing New Patriotic Party.

MyNewsGh.com visit to the party office today can confirm that the office has been locked for some weeks now.

The party’s daily activities at the office have since been halted due to the closure.

According to some residents, the landlady of the facility evicted the ruling NPP from the office about 3 weeks ago.

A close source has hinted that the party’s affairs in recent times are being administered at Wontumi’s radio and TV stations premises at Asokwa.

Meanwhile, the NPP’s yet-to-be-completed party office at Asafo Dadiesoba has been left to rot in the bush despite the party being evicted from their Krofrom office.

Some party members who spoke to this website on the closure of the office argued that Chairman Wontumi is unconcerned about the closure because once the affairs of the party are being managed in his media houses, he will seize the opportunity to manipulate the impending NPP regional elections.