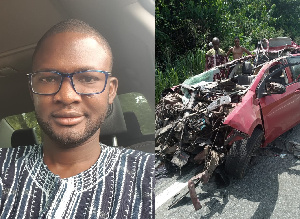 Luri Tia John-Bosco, the Upper West Regional Youth Organiser of the New Patriotic Party (NPP) is currently in stable condition after he was involved in an accident on the Accra-Kumasi Highway on Tuesday dawn.

MyNewsGh.com reporters who visited the 37 Military Hospital where he is currently on admission, reveal that he is recuperating despite suffering some injuries in view of the impact of the accident.

His Toyota Corolla vehicle is however mangled beyond repairs and has since been towed from the scene of the accident while police indicate that they are investigating the unfortunate development.

The Upper West Regional Secretary aspirant as reported by MyNewsGh.com was involved in an accident on Tuesday dawn while on his way to Wa from Accra.

His vehicle reportedly run into a stationary cargo truck on the road around the Nkawkaw-Kumasi highway.

Other road users came to his rescue and rushed him to the Holy Family Hospital at Nkawkaw but he was later referred to the 37 Military Hospital where he has been on admission.