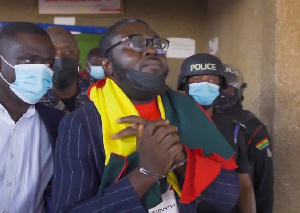 Lawyers for embattled #FixTheCountry convener Oliver Mawusi Barker Vormawor have filed an application for his release on bail at the Tema High Court in Accra.

The hearing for the bail application has been fixed for Thursday, March 10, 2022.

In a statement by #FixTheCountry, the group accused the police of filing Oliver’s case at a court it knew had no jurisdiction to grant him bail.

According to the group, owing to the failure of the courts to order the police “to take him to a court which has jurisdiction to ensure his liberty as Article 14(3)(b) of the Constitution demands”.

He (Oliver) has signed the affidavit in support of an application for bail at the High Court. The application has since been filed and will be heard on Thursday, March 10, 2022, at the Tema High Court.”

Oliver Barker was arrested by the police on February 11, 2022, at the Kotoka International Airport, having arrived in the country from the United Kingdom.

His arrest, according to the police who charged him with treason felony, was in connection with a Facebook post he made in which he threatened to “do the coup” himself if parliament goes ahead to approve the controversial E-levy Bill.

He was first arraigned before the Ahaiman District Court some three days after his arrest, where the court denied him bail based on its lack of jurisdiction relative to the charges against him.

However, the court advised Oliver’s counsel to seek bail at a higher court when his case was called again on February 28, 2022.

The same advice was issued by a panel of Supreme Court Justices when his legal counsel filed a case against the jurisdiction of the Ashaiman District Court to put him to trial.