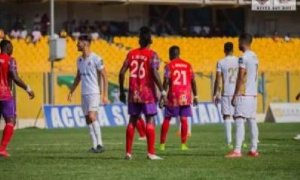 Prev1 of 2Next
Use your ← → (arrow) keys to browse
Kumasi Asante Kotoko and Accra Great Olympics took the initiative as social media users targeted Accra Hearts of Oak with trolls following their humiliating defeat at the hand of Wydad Athletic of Morocco.

Hearts of Oak were given a 6-1 drubbing in Morocco which has brought an end to their campaign in the CAF Champions League.

The Phobians have now dropped to CAF’s second-rated club competition which is the Confederation Cup, a trophy they won in 2004.

The Phobias have become the subject of social media tolls with fans of rival clubs poking fun at them for taking 6 goals on the road.

A quote by Hearts of Oak coach Samuel Boadu prior to the game has been circulating on social media as tweeps make fun of Hearts of Oak.

Some fans are also worried about the state of Ghana football as the country’s league champions have been defeated in a humiliating fashion.

Hearts managed to embarrass Ghana than Kotoko did at Al Ahly with Mark Adu Amofa and Baby Rooney dems.

That’s what happens when you win a rigged league, we kept saying it but folks said we didn’t have evidence.

Wydad have finished spelling “Hearts” it’s left with the Of Oak.