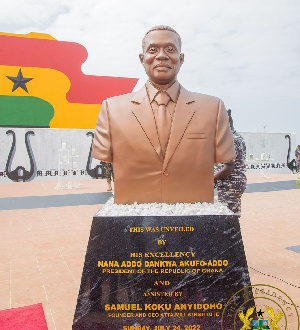 The Minority in Parliament has expressed their displeasure at the omission of the name of the late President Evans John Atta-Mills from the bust at his burial site Asomdwee Park.

He calls on President Akufo-Addo and others who erected the bust to immediately effect changes and replace it with one that has the name of the late professor.

Meanwhile, former President John Mahama says it is untenable for the tomb of the late President Mills to be renovated without the involvement of his family.

He however noted he is not against the decision by government to give a facelift to the Asomdwee park, the final resting place of the late President.

“Such a man and his memory are worthy of utmost respect and dignity, even as he rests with his maker. It is therefore a matter of deep regret to me and many others that what should have been a solemn 10th anniversary to celebrate the late former President over his life and draw useful lessons has been heralded by needless controversy about his final resting place.

“Any effort to give a facelift to the Asomdwee park where his mortal remains lie and where we are holding this event should be welcomed, as it is no more than Professor Mills would have deserved for his outstanding contributions to our nation’s development and its forward match,” Mahama said at an event to mark the 10th anniversary of the passing of the late President

“It is however untenable for this to be done without recourse to his family while involving individuals whose actions and conducts have only served to drag the signifying professor’s name and memory into needless and unnecessary public controversy,” he added.

However, President Akufo-Addo has described as unfortunate accusations against government following the renovation of the tomb.

“Sometime after becoming President, I became aware of the sad state of Asomdwoe Park, and, in 2020, I received a request from the late President’s energetic Communications Director, Koku Anyidoho, who runs the Institute named after the President, for the assistance of Government to rehabilitate the facility. I agreed, and, subsequently, I instructed the Coastal Development Authority to undertake a thorough rehabilitation of the Park, with the close co-operation of the Institute.

“It was not right that the Park had been allowed to deteriorate considerably over the years since his burial in 2012, and I am happy that it was under the Presidency of Nana Addo Dankwa Akufo-Addo, allegedly his “fiercest critic”, that Asomdwoe Park has been elevated to a status befitting the final resting place of a President of the Republic of Ghana. I did so with that objective solely in mind, and not to exploit or take advantage of any so-called divisions in the political party to which he belonged. Those alleged divisions are not of my making, and do not, in any way, inure to my benefit,” the President noted.