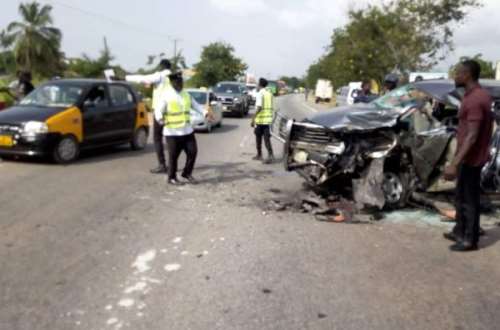 A seven-year old girl has lost her life in an accident on the Aflao Police Station-Diamond Cement Road in the Ketu South Municipality.

Superintendent (Supt) of Police Bempah Sarpong, the Aflao District Police Commander in an interview with the Ghana News Agency said Mr Amuzu, a security guard at Ecobank-Aflao branch was taking his children to school on a motorbike when the accident happened.

He said the victim was heading to Aflao from the Diamond Cement area and was overtaking a clinker truck belonging to Diamond Cement Ghana Limited by the right (instead of the left) when a motorbike, coming from the opposite direction, crashed into him knocking him and the children off the motorbike.

Supt. Sarpong said the deceased went under the clinker truck and got run over in the head leading to her instant death and the body subsequently deposited at the morgue.

He disclosed that the rest, Israel, was seriously injured and was rushed to the theater ward of the Ketu South Municipal Hospital while Petro and the father who suffered severe injuries in the head and the right thigh respectively, were on admission at the same Hospital.

The District Commander said the driver of the clinker truck had been detained by the Police to help with investigations while the other motorcyclist had absconded.

The stretch, popular referred to as Diamond Cement Road just like many roads in the Municipality, is in a bad state (dusty and with potholes) compelling mostly motorcyclists (for commercial vehicles hardly ply the stretch) to ride at all directions of the road in attempts to either dodge potholes or avoid the dust from heavy trucks.

Residents had in the past made many attempts to get the road fixed to no avail with the latest being a demonstration in May this year.

Woman knocked down by hit-and-run driver on N1 Highway