Home / GENERAL NEWS / One killed, two others injured in gun battle at Krokrobite 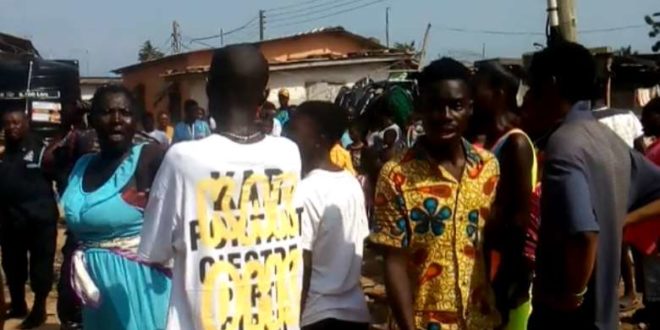 One killed, two others injured in gun battle at Krokrobite

One person is confirmed dead, while two others, including a fifteen-year-old boy, are receiving treatment at the hospital following a gun battle at Krokrobite in the Ga South Municipality.

Citi News sources say the two factions are involved in the gun battle over who has the right to perform rituals to lift the ban on drumming and noise-making.

It is unclear who the culprits are, but calm was restored to the area after the Krokrobite Police visited the area.

The ban on drumming and noise-making in the Ga State commenced on May 9, 2022.

“This issue is between the two factions in Kokrobite who are fighting over who has the right to perform rituals to commemorate the lifting of the ban on drumming and noise-making”.

“One faction warned the other not to engage in drumming and noise-making since a chief of the town is dead, but that didn’t go down well with members of the other faction who took up arms and started firing resulting in the death of one while two others including a fifteen-year-old boy sustained gunshot wounds,” Mary Obitse Saa, an eyewitness, told Citi News.

Jerry Nunoo, a physician Assistant at the Kokrobite Health Centre where the two other individuals who sustained gunshot wounds are being treated indicated the extent of gunshot wounds to the victims.

“Two victims were brought here after the gun battle. A 38-year-old woman and a 15-year-old boy. The 15-year-old boy suffered a puncture wound on the mid-arm on the right and the lady had a punctured wound on both thighs, but we will be referring them to the Weija Gbawe Municipal Hospital for further treatment,” Jerry Nunoo said.

Leadership of the two factions have been invited to the police headquarters for the interruption.

Tags at Battle GUN IN injured killed Krokrobite ONE OTHERS two