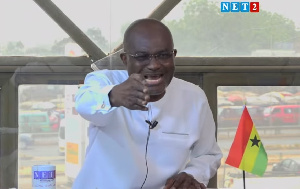 Assin Central Member of Parliament, Kennedy Agyapong is not happy with his party, the New Patriotic Party, NPP.

Agyapong’s concern relates to the sanctimonious nature of the NPP’s politics, where the party gives developmental attention to areas where they don’t get any votes.

He particularly touched on the area of roads ‘calling out’ the Roads Minister for taking loans to build infrastructure in places the party is not ‘welcome’ politically.

According to him, most of the votes he lost in the last election was because of roads the party failed to build, advancing that that failure cost the party big time in the Central Region.

“Why I lost votes (in the 2020 polls) is because of roads, they did not fix all the roads in my constituency. All our heavy losses in Central Region were because of roads. Not a single major road was fixed, so they deserve to vote against us.

“I have a problem with Amoako-Atta, if you look at the places he is taking loans to develop, meanwhile, he is silent on the Accra – Winneba road…look at the traffic,” Agyapong said when he appeared on Net2 TV’s Morning Show during the week.

“Amoako-Atta is loving his neighbours and hating himself, because of places he has taken loans to build bridges and things, if you are not careful we will vote against the NPP. You abandon places that vote for you and please others.

“NPP takes loans to build roads in places the party got 0% and leave us, afterwards you come to ask why we lost Central Region. They (government) are disrespecting us. What kind of love your neighbor and hate yourself policy is this?” Agyapong fumed.