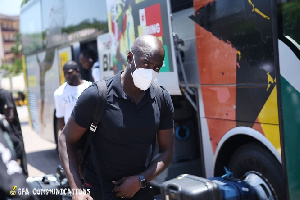 Interim Black Stars coach, Otto Addo has reportedly met with some key Ghanaian players in England. Right after his appointment on February 9, 2022, as the new coach, the former Ghana International jetted off from Germany to England to set the ball rolling.

According to a report by Graphic Sports, Otto met with some key Black Stars players which included striker Jordan Ayew, and Arsenal midfielder Thomas Partey.

The interim Ghana coach is also reported to have met with Reading FC players Andy Yiadom and Baba Rahman about the upcoming assignment.

“I can confirm that the GFA facilitated talks between Otto Addo, the players and members of his technical team and so far, things are going on smoothly,” an undisclosed GFA official told Graphic Sports.

An earlier report by Asaase Radio confirmed that the German-based coach had travelled to England to meet with his Technical Advisor, Chris Hughton and assistant coach, George Boateng of Aston Villa.

Otto Addo was appointed interim coach with Masud Didi Dramani and George Boateng acting as assistant coaches while Chris Hughton was appointed as the Technical Advisor last week Wednesday by the GFA.

Otto’s first game in charge will be against Nigeria on March 24 at the Cape Coast Stadium before travelling to Abuja for the return game on March 29 2022 World Cup playoffs.