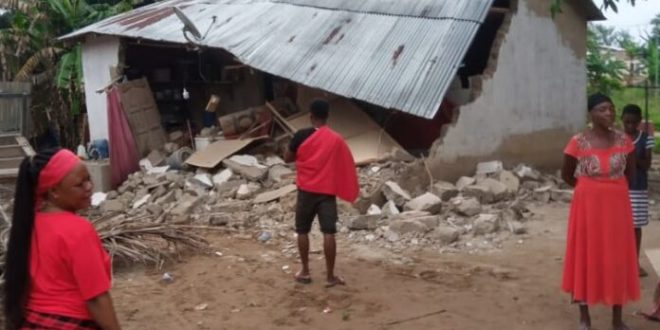 Angry residents of Panpanso No.1 a community near Teacher Mante in the Eastern region went on rampage Monday morning after over 11 houses in the community were illegally demolished by masked armed men at the behest of an alleged real estate developer.

Over 200 demonstrators blocked the highway with logs and stones, and additionally burnt tyres.

The situation created gridlock on the road.

Police from Teacher Mante led by the District Commander ASP Mr Francis K. Nartey rushed to the scene to meet a group of furious town folks numbering over 200 blocking the road with logs and burning lorry tyres.

The police managed to convince the angry demonstrators to clear the road which they obliged.

According to the Public Relations Officer of the Eastern Regional Police Command, DSP Ebenezer Tetteh, the police team visited the scene of the demolished buildings and found eleven (11) houses pulled down with a payloader machine for no apparent reason leaving the dwellers homeless.

Unfortunately, the payloader machine and most of the suspects left the scene before the arrival of the police.

Nonetheless, one Dogbe, an Okoda rider aged 23 years was arrested for his alleged involvement.

DSP Ebenezer Tetteh said efforts were being made to arrest one Kofi Acquah alleged to be the leader of the group that demolished the buildings.

More than 40 persons have been rendered homeless due to the illegal demolishing of their houses.

Officials of the National Disaster Management Organization, NADMO, were on grounds for assessment to facilitate emergency support for the victims.

Previous 60-year-old security man allegedly killed, buried in incompleted building
Next Five types of people you will find at a Ghanaian wedding