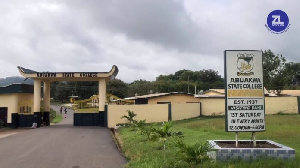 About 45 students of the Abuakwa State College(ABUSCO) in the Eastern Region have been suspended indefinitely by management of the school for allegedly engaging in gangsterism.

They are alleged to have formed a group known as “Above the Law”.

The form 2 Green track male boarding students of Akyem Asafo House have since been thrown out of the school .

A letter dated December 15,2021 and signed by the Headmaster of the School, Eric Hanson Adjei Sarpong addressed to parents of the affected students explained that “your ward has been suspended indefinitely from the school with immediate effect”.

The school explained it established that the students committed offences such as formation of unauthorized groups with hidden agenda resulting in rivalry conflicts amounting to gangsterism contrary to Rule(1)1 of the code of conduct of the school.

Management of the school also stated that the students organized gang meetings in the school without approval, possessed and used lethal weapons and fought with same on campus. That, the students used mobile phones to coordinate their activities, failed to observe light out ,and, deceived the disciplinary committee during interrogation.

The letter further said the conduct of the students violates laid down rules of the Ghana Education Service and if not checked would breakdown discipline in the school.

“The action has therefore been taken to serve as a deterrent to the entire students body,” the letter said,

The Housemaster was directed to immediately eject the students from the school.

“By a copy of this letter ,the Housemaster is to see to his immediate exit from the school after he has handed over all school property in his possession.You are to counsel him adequately at home while we await a decision from the Board of Governors”.

Parents and guardians of the affected students who stormed the school were fuming with anger over what they call inconsiderate decision by management of the school.

Some went berserk on the campus in protest .

The headmaster of the school hanged up when Starr news contacted him for confirmation and further explanations.

He refused to pick subsequent calls to him thereafter .