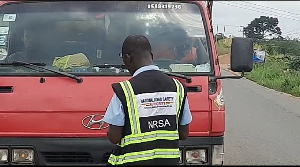 Over 50 drivers have been arrested on the Gomoa Akotsi, Akraman, and the Kasoa-Cape Coast Highway in the Central Region for fake insurance stickers on their vehicles.

The joint operation was conducted by the Ghana Police Service, the National Road Safety Commission, and National Insurance Commission team.

Some of the drivers who were arrested with fake Insurance Stickers were angry with the National Insurance Commission for failing to fight the unauthorised companies in the insurance sector.

In an interview with EIB Network Central Regional Correspondent, Yaw Boagyan, some of the arrested drivers said they cannot be blamed and arrested for the fake stickers in the system.

They called on the National Insurance Commission to also arrest dubious insurance companies in the system to curb the situation of innocent drivers patronising them.

Meanwhile, the Central Regional Assistant Planning Officer of the National Road Safety Commission, Dennis Tenkorang Osei revealed that the Central Region was ranked fourth in the 2021 Second-Quarter Statistics on road accidents in Ghana.

He, therefore, appealed to drivers plying on the Kasoa, Cape Coast Highway to observe road signs in order to reduce the accidents in the region.

“We are checking the essentials that make the vehicle worthy to be on the road. The Commission is not happy with the rate of accidents and would work assiduously to reduce the consistent accidents that occur in the region,” he assured.

“We have consistently advised drivers and car owners to verify their stickers whenever they go for them. We are not only here to arrest but to also educate car owners and drivers. Mostly, drivers only get to know that they have a fake insurance sticker when they are involved in an accident or during such exercise of checking them,” she disclosed.

Sunyani MCE goes to the recue of market women