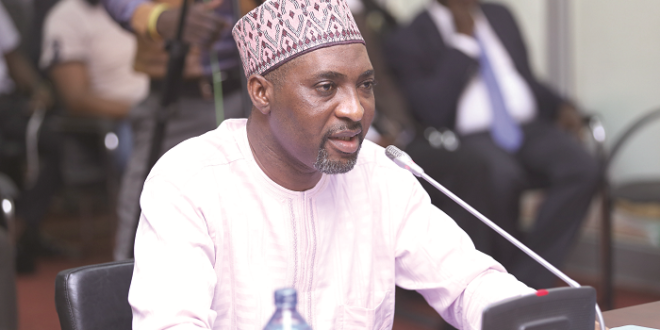 Speaking at a forum in Parliament, he said that out of 275 MPs, only about 100 of them actually show up to work while others who are usually absent get others to sign their name for them.

According to Mr Muntaka, the house is losing its integrity as absentee MPs usually spend their time outside the house doing private business.

“Even the processes that we have in the house chaired by the second division speaker, where if you have a business you have to report it to the house. The speaker set a committee so you go to defend it.”

“They look at the business and the work that you do. If they are convinced that it is not going to be a conflict they give you a certificate and the speaker signs it. Many MPs don’t do it and they continue with their business,” he lamented.

He explained that these actions are mostly as a result of the election processes where hardworking lawmakers are voted out and those who shirk their responsibilities are left at post.

“How do you go to one primaries (referencing NPP Primaries) and lose 12 chairpersons of committees, people who dedicate time to stay in the house to help run government business.”

His comment follows concerns raised by the First Deputy Speaker of Parliament, Joseph Osei Owusu over the appearance of the names of some absentee Members of Parliament in the House’s attendance book.

It was discovered on Thursday, July 2, that some MPs who were not in the House had their names in the votes and proceedings a practice he was not happy about.

He called for an investigation into the matter saying “the real issue here is who has been marking those absent present.”

Mr Muntaka said it was unfortunate that some of his colleagues are not willing to go through the painful process learning of lawmaking, sitting for committees and doing research on said committees.

The Minority Chief Whip said these actions have not only turned the house “upside-down” but destroying it alongside its integrity built over the years.

Speaking on Top Story on Joy FM he said that because they are supposed to check each other, it is tedious to get his colleagues to do the right thing.

The MP advocated for a system in the chamber that allows people to log in and log out of the house.

This, he said, will prevent members from signing for other members when they are not around.

“When we have a bio metric system that we use and every month, after establishing an ethics committee, if one do not have this number of hours in the month they get a deduction in salaries and beyond that abcd can happen.”

Previous My family and I can’t live without NPP because is in our DNA – Obour
Next Mahama is confused, lacks credibility – Owusu Amankwah