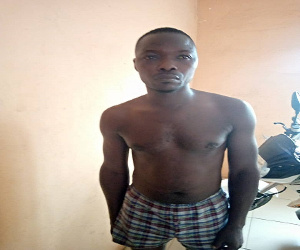 A 36-year-old pastor will spend the next eight years in prison away from his pregnant wife after he was found guilty of defiling a 15-year-old junior high school student of the Nuaso Presby Junior School 1.

Nii Kwartei on Wednesday, 23rd March, 2022 lured the victim into a guest house at Manaam, a suburb of Odumase-Krobo where he defiled her.

Prosecuting, C/Inspr. Peter Azigi on Friday, 25th March, 2022 told an Odumase-Krobo Circuit presided over by Mr. Frank Gbeddy that the complainant in the case, a 36-year-old petty trader, lived with her children at Nuaso, a suburb of Odumase-Krobo.

He added that the convict also lived in the same vicinity as the complainant and her children where he operated a Ministry. He furthered that the convict took advantage of the victim’s association with his ministry to propose love to her.

According to the prosecution, the victim visited Nii Kwartei in his home at about 11 am last Wednesday where he asked her to accompany him to the market. He said on their way, he managed to convince her to go with him to the guest house where he forcefully had sexual intercourse with her.

He subsequently gave her Ghc20 and asked her to go home. Upon reaching home, the complainant demanded to know where her daughter was coming from, forcing the victim to narrate her ordeal to the complainant.

A complaint was immediately lodged with the Odumase-Krobo Police where police medical report forms were issued to the complainant to send the victim to hospital for medical examination and endorsement.

Previous VIDEO: ‘That was real robbery’ – Nigerian fans in Kumasi lament poor officiating
Next Expect your salaries to be delayed if you don’t pass E-Levy – Kusi Boafo to NDC MPs