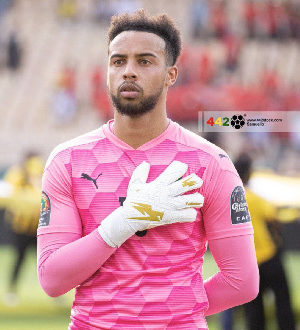 Jojo Wollacott might have won some Ghanaians over with his performance in the two matches against the Super Eagles of Nigeria in March but certainly not Peace FM reporters, Dan Kwaku Yeboah and Nana Yaw Kesseh.

The two ace broadcasters are still not convinced by the competence of Swindon Town goalkeeper as goalkeeper that merits a Black Stars call-up, talk less of being the first choice.

In the estimation of Nana Yaw Kesseh and Dan Kwaku Yeboah, there abound many goalkeepers in the Ghana Premier League who are more talented than Wollacott.

Nana Yaw Kesseh alleges that the Black Stars is being used to market and give exposure to Wollacott so that he could be sold to another club.

He mentioned names of goalkeeper in the Ghana Premier League who he reckon are upgrades on Jojo Wollacott.

“They think they’ve qualified for the World Cup so there is no problem but they should go with their Wollacott. I don’t understand. If you want to use the Black Stars to market your player … You can’t tell me that Wollacott is better than Danlad and the Bechem United goalkeeper. Abalora is even better. He’s won the league. Richard Attah is also better,” he said.

Dan Kwaku Yeboah chipped in with the viewpoint that the Dreams FC goalkeeper is ahead of Wollacott in terms of quality .

He also hinted of an allegation that Wollacott’s stay in the team is to serve the interest of certain persons.

“Even Kurt Okraku’s goalkeeper is better than Wollacott. I don’t know what they have seen in him that they want it in the team by all means,” he said.

Nana Yaw Kesseh then came back with the viewpoint that Jojo Wollacott fails the two basic test used in rating goalkeepers.

“We assess goalkeeper based on two things. The timing of the goalkeeper and his anticipation. But this someone who is scared of shots,” he said.

Contrary to the viewpoint held by the two journalists, Wollacott appears to be popular in the Ghana team and will most certainly be Ghana’s first choice goalie at the World Cup.

He was recently crowned the best goalkeeper in the English Football League Two.