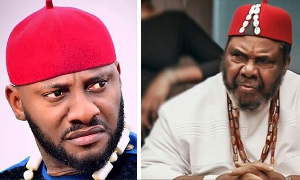 Pete Edochie, a veteran actor in Nollywood, talked about how he felt when his son, actor Yul Edochie, told him that he had chosen Judy Austin as his second wife.

Pete Edochie told Vanguard in a new interview that he didn’t like what his son chose to do, but that it was his choice.

“I didn’t feel good, but I’m a Christian and I read the Bible, so I knew everything would be okay. Solomon was known as a wise man, even though he had 700 wives and 300 concubines.

I can only say that it’s his choice, and I don’t know why he decided to get a second wife.

He was said to have said.

Yul made headlines in April of this year when he said Judy would be his second wife. His first wife, May, has since said that she doesn’t agree with what he did and that she won’t be forced to accept something that goes against her faith.

Yul has been married to May, the woman he met when he was young, for 17 years. Earlier this year, he announced on social media that he was getting a second wife.

Judy Austin is the second wife. She is an actress and was married before she and her ex-husband split up. Two children came from the marriage. Star Dike is their son together with Yul.

Speaking further about all his children, Edochie said; “All my children are after my heart. Whatever they do I am still their father, and I am very close to all of them. I don’t have a favorite one. And I didn’t raise them like that. Whatever you find in my house is accessible to all of them. I don’t contest their choices with them. If any one of them meets a girl and he’s in love with her and he wants to marry her, let that person go ahead and do so. I gave them the necessary education they require to stand on their own. I bought a car for each one of them when they graduated from the university.”

On why Yul seems to be different from his other children, the veteran noted that Yul is into show business and he tries to create controversies around himself.

“That’s why he has a lot of followers on social media,” Edochie added.