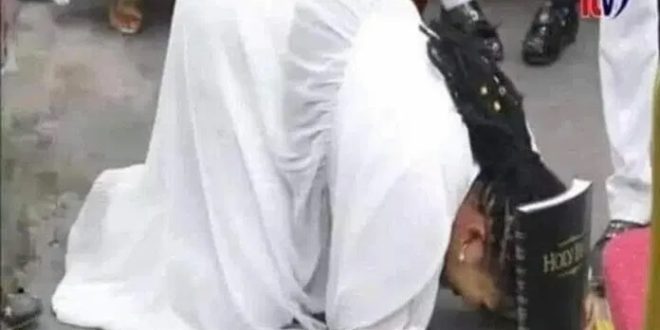 The picture, apparently a snapshot taken from a video broadcast, appeared to depict the former fetish priestess giving lessons on doggy-style sex position in the church when in fact she was praying.

The snap is seen from the perspective of members of the Christian community as a sign of reverence and submission to the Lord.

But some mischievous social media users have attached their own dirty minds to it.

Check out the hilarious photo below:

Meanwhile, Agrdaa has given some church members numbering about 27 money for their personal use.

Agradaa is shown in a video filmed on the premises of her temple handing out cash to her followers, each collecting 100ghc from our checks.

Nana Agradaa claims to have changed from her past fetish priestess methods in her new capacity as a “prophet/evangelist/woman of God.” READ MORE