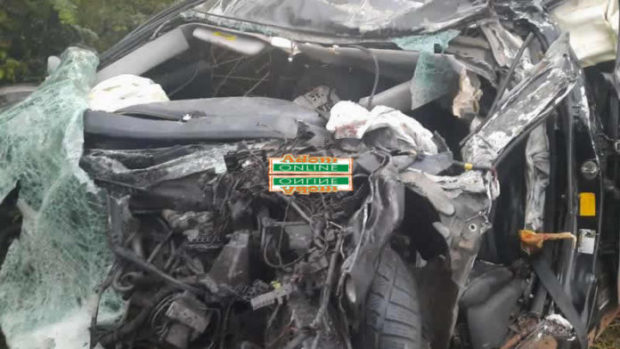 Two individuals said to have been driving on the Tamale-Buipe highway have lost their lives due to a fatal accident on the stretch.

According to the Central Gonja District Police Commander, DSP Kwame Nimo, one of the deceased has been identified as David Bakuri, the Health Director for the district.

Mr. Bakuri was travelling with a woman yet to be identified in a Nissan Pick-up with registration number GV 723-18.

Investigations carried out by the Police according to AdomNews correspondent, Rebecca Natomah, reveal that at Sawaba, the Central Gonja Health Director ran the vehicle into the rear of a stationary DAF trailer with registration number AS 1842-G, parked on the road.

The unidentified woman is said to have died on the spot, however, Mr. Bukari was pronounced dead upon arrival at the Tamale Teaching Hospital.

Meanwhile, the remains of the deceased have been deposited at Tamale Teaching Hospital Mortuary for preservation pending autopsy.

Subsequently, their remains will be released to the respective families according to DSP Kwame Nimo.

One dead, others injured in Aflao Diamond Cement Road crash