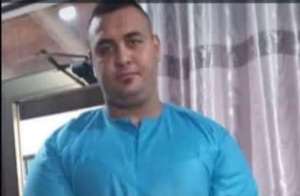 The Ghana Police Service has announced the arrest of the Lebanese man in the viral video captured threatening to behead an unidentified man.

In a video that went viral on social media on Tuesday, April 12, 2022, the man who is alleged to be Lebanese national is seen shouting and making gestures of his intention to behead a shop owner.

Following investigations by the Ghana Police Service, he was tracked and arrested.

“The Ghana Police Service has arrested Osman Brustani in connection with a viral video in which he was captured threatening the life of his victim.

“The suspect is in police custody and will be taken through the due process of the law,” parts of a Police statement issued on Wednesday, April 13, 2022, have said.

Meanwhile, the Inspector-General of Police (IGP), Dr. George Akuffo Dampare has reached out to the victim via a telephone call.

The man who is said to be traumatised by the incident has been given psychological support by a clinical psychologist from the Police Hospital.

The Police in its statement have assured the general public that in line with its mandate, it will continue to ensure law and order in the country.

Find more from the story in the attachment below:

Previous Cable thief electrocuted to death at Aflao
Next PHOTOS: Assailants descend on Zacholi in Yendi, shoot 9 men to death, injure others