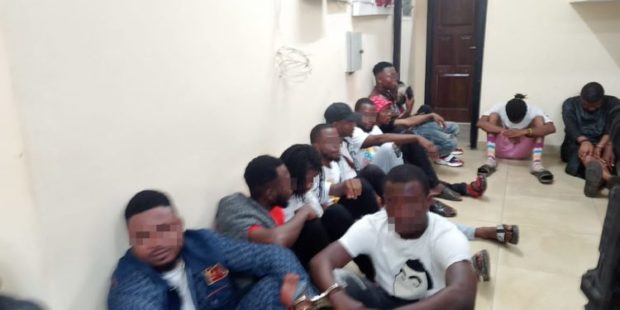 Police arrest over 100 persons in dawn swoop at Gomoa Nyanyano

More than 100 persons have been arrested by the Central East Police Command in a dawn swoop last Friday.

The persons were arrested at SMG arena pub on the Gomoa Nyanyano stretch as part of police operations to clamp down on criminal activities happening in Kasoa and its surrounding communities.

The arrested persons included foreign nationals and some Ghanaians.

According to the police, the individuals were practising all forms of social vices, including smoking Indian Hemp among others.

Some commercial sex workers were also arrested for not adhering to COVID-19 protocols.

Deputy Central East Police Commander, ACP Oduro Amaning indicated that the persons arrested will be screened and if found culpable will be made to face the law.

“It was last Friday that we had an intel, so we went to the place. We had more than 100 people from that small place and got them arrested because they were engaged in several social vices and were flouting all the protocols. All that we are ensuring is that there will be peace and that, crime will go down in the area. We are now screening them”, he said.

The Central East Police Command was recently created as a Police Region to help in the fight against crime, and the command says that mandate will be fulfilled.