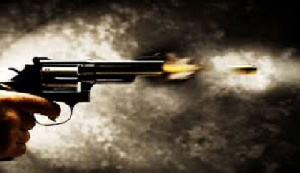 A skirmish ensued at the Baba Yara Sports Stadium in Kumasi after Asante Kotoko were eliminated in the FA Cup round of 64 by city rivals, King Faisal.

As reported by Kumasi-based broadcast journalist Jonathan Asiedu on Asempa FM’s SportsNite, a scuffle ensued between Kotoko’s bus driver and a popular fan after the match had ended.

A police officer in his bid to quell the fracas reportedly fired a gunshot into the skies.

According to the reporter, some senior police officers who were present at the stadium during the incident expressed disappointment in the action of the officer who fired the gunshot.

A video showing the aftermath of the gunshot reveals a tense mood while the victors of the day allowed their victory to settle in.

Kumasi King Faisal made it into the Round of 32 stage in the 2021/22 MTN FA Cup competition after beating Asante Kotoko on Wednesday, December 29, 2021.

King Faisal secured a narrow win after grabbing a lone goal in the 20th minute of the game.

Despite fighting hard, Kotoko failed to pull an equalizer until the referee whistled to end the game.

Reports from the Baba Yara Sports Stadium indicates the fans of the Porcupine Warriors who were not enthused by the performance of their team booed at the Kotoko players.

Watch video of the moment police fired a gunshot at the Baba Yara Sports Stadium:

Watch aftermath video of the gunshot incident below:

Meet the powerful and rich people of East Legon