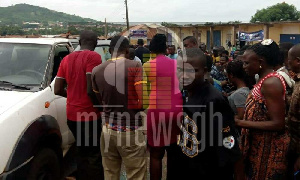 A social media user has claimed that Ghana Police Service is framing his brother over the bullion van robbery saga despite evidence that absolves him.

The Social media user, one Recogniz Real who is a brother to one Affisu Yaro known on social media as Hafiz Elien, a police officer currently on trial along with 4 others for the Bullion van robbery; his brother his Affisu is innocent.

He further claimed on the day of the another robbery allegedly pinned on the his brother, he has another alibi. He claims an Uncle who was due to travel out of the country couldn’t leave and spent time with he and the said Affisu.

The police have not reacted to the development as investigation continues into the case.

But MyNewsGh.com checks revealed the arrest of Affisu was related to an attempted robbery at North Kaneshie for which an Accra Circuit Court denied him and his accomplices bail.

According to the state prosecutor, it would be dangerous to allow such a criminal suspect back into society.

Albert Ofosu, Affisu Yaro together with two other police officers and a civilian were arrested over their alleged involvement in the recent robbery attacks on bullion vans in Accra.

According to the court, the suspects must remain in police custody for further investigations. The case has thus been adjourned to 28th March 2022.

My brother was a close friend to Kobby (the police who died in the bullion van attack)You release such a statement to the public to know indeed Ghana police is working meanwhile all be lie..just to tarnish the image of your own people making them look like criminals in the face of the nation…you picked the main murders of Kobby at 02:30hrs midnight and kill them then you come out to the public and say a different thing.you accused my brother of been one of the murderers.you later realized on that same day my brother was on duty at labadi beach under a cctv camera on him 24/7…are you telling the nation my brother is a two in one person to be at two different places at the same time..?you got to know he is clean on that side now you accused him of attempted robbery meanwhile the pictures of people captured during that incidents at kaneshi his image was not included.even on that same day I was home with him when my uncle left for flight.interestingly his flight was canceled and he came to meet us home…so why then are you telling the whole nation my brother is a criminal…you know the real robbers and killers of this cases and surely the truth shall prevail..this is defamation of character at the highest level..you tell the nation they were arrested at their hideout meanwhile my brother was in Kumasi (he had return from our grandmother’s burial at the north) and was called by his commander to come to Accra..you accused him of having weapons with him yet to went to search at his accommodation only to pick his uniform and found nothing else (in fact they didn’t even border searching the room)..what exactly are you searching for.even at the peril of my life I will stand tall for my brother because I know he is not a criminal..the best of judges is Allah and he will fight for the innocent Insha Allah.

If you don’t know the whole story shut up till we get to the end of the show..he is doing well and none can harm him..

Hafiz Yaro will come out safe…Hafiz is not a criminal…long life my hood boys.