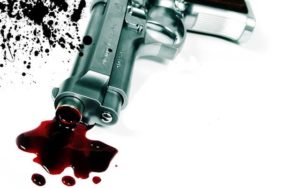 Police kill robber after he stabbed man at Awudome Cemetery

Police at Kaneshie on Friday night gunned down a suspected robber at the Awudome Cemetery after he had stabbed and robbed a passer-by.

It was on his second attempt to rob another commuter when he was shot dead, according to police.

A situational report made available by the police said the robber, part of a two-man gang, attacked a gentleman who was walking along the SSNIT Building heading towards Obetsebi Lamptey Roundabout.

The gang stabbed him in the neck and robbed him of his black bag containing spare parts, his phone and a cash of GH¢250.

He ran to the near-by police station for assistance but the robbers could not be traced when the police got there.

The officers combed through the near-by bushes but did not find them.

They then laid ambush and the robbers resurfaced in an attempt to rob another target.

One of them, in his early 20s, according to the police report, was shot and the other managed to escape.

The shot robber was rushed to the Police Hospital but was pronounced dead.

His body has since been deposited at the Police Hospital mortuary for identification and autopsy.

Previous VIDEO: Young man jailed for 8 years for impregnating 13-year-old girlfriend
Next 97 -Year -old Who Was Raped Speaks , Says She Abstained From S£x for 40 Years