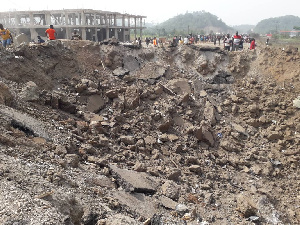 Police appeal for people to open up churches, classrooms for victims of Bogoso explosion

Police take over situation at Bogoso

Amid several contradicting reports on what might have led to an explosion at Bogoso, the Ghana Police has broken silence on the matter, stating that it came about as a result of a head-on collision.

The police said in a statement that a motorcycle, and a car heading towards a mining site in the locality crashed, the motorbike went under the said truck caused a spark and that led to the explosion.

“Meanwhile, preliminary investigation has established that a mining explosive vehicle moving from Tarkwa to Chirano mines collided with a motorcycle resulting in the explosion,” the statement from the Public Affairs of the Ghana Police Service said.

A situational report from the report also indicates that the said truck containing explosives was being escorted by a police officer.

The Service has since appealed to nearby towns around the accident scene to open up their public places such as classrooms and churches to accommodate surviving victims.

The Service has also advised people around the scene of the incident to move further away even as it continues its investigations and works towards restoring safety and calm to the area.

“Reference to our earlier emergency public notice, the Police have taken charge of the situation providing security to enable the emergency workers including the Ghana National Fire Service, NADMO and the Ambulance Service to manage the situation.

“The public has been advised to move out of the area to nearby towns for their safety while recovery efforts are underway.

“An appeal is also being made to nearby towns to open up their classrooms, churches etc to accommodate surviving victims,” a statement from the Public Affairs department of the Service said.

The statement further explained that details available to the police show that over 10 people were killed and several others were injured.

It also stated that all the victims of the explosion are receiving medical treatment at various hospitals and clinics within the area.

They have called for calm even as investigations continue into the incident.

“We continue to urge the public to remain calm as we manage the situation. Further updates regarding the emergency evacuation of the injured will be communicated in due course,” it said.

Many people are feared dead and several injured in an explosion that happened at Apiatsi, a suburb of Bogoso in the Prestea Huni Valley Municipality.

Few minutes after the collision, the vehicle exploded, affecting over 500 homes in the area. The highway has been cut into two burying the vehicle.

More: 44 villages in Drobo State support the Anti-LGBTQI+ Bill, warns MP not to vote against it