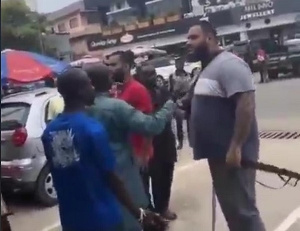 The Ghana Police Service has responded to calls from social media users for them to arrest a Lebanese seen in a viral video allegedly threatening to kill a Ghanaian with a sword in broad daylight.

The Police in a statement on its official Facebook page said, “this viral video has come to our attention and we are working on it.”

GhanaWeb sighted a viral social media video of a man alleged to be a Lebanese threatening to slash the throat of a Ghanaian with a sword.

According to multiple reports, the Lebanese and the Ghanaian had an argument surrounding where the Lebanese parked his vehicle.

A Facebook user, Benjamin Wayo Mahama, who posted the video said the Lebanese allegedly parked his car in front of the Ghanaian’s shop for almost an hour and was eventually confronted by him.

“According to reports, this Lebanese man parked his car in front of the shop of a man at Osu for almost an hour. When the shop owner finally told him to park his car well so that he can also do his business, the Lebanese started abusing him verbally and telling him he will kill him. He then came out with a sword and the shop owner had to run into another shop for cover. Ghana Police, please do something,” the Facebook user wrote on his timeline.

In the 15 seconds amateur video, a group of men try to stop the Lebanese from proceeding to enter the shop to carry out his intended action.

While being restrained he is heard shouting “Come out! Come out! Come Out, I will cut your neck [gesturing to slash his throat with the sword].”

He then dashes towards the shop where the Ghanaian is seeking hostage while a man tries to restrain him again.