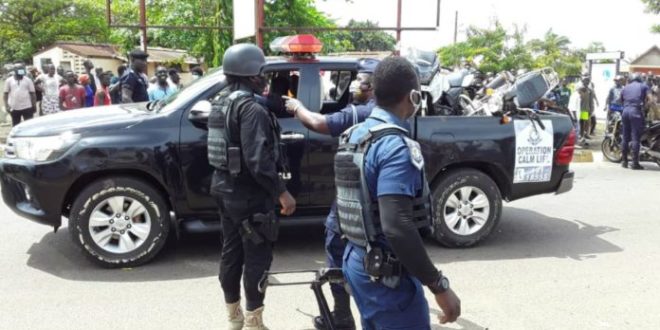 • A young man was at the receiving of a bullet shot by the police at the GIMPA/Fiesta Royale junction around 9:30 pm Saturday night

• He was a member of a group of suspected armed robbers being targeted in the area by the police, after a tip-off

A suspected robber has been shot and injured by the Police during a robbery operation at the GIMPA/Fiesta Royal junction in Accra on Saturday night [June 12] after a tip-off from a taxi driver who had been robbed by the suspects.

According to the Accra Regional Police Public Relations Officer, DSP Afia Tenge, the suspects upon seeing the Police, attempted to escape and run into a nearby thick bush.

She said the Police in the process of arresting the suspects opened fire which ended up hitting one of them.

“After a short while, the suspects emerged again; this time from another direction of the forest to continue their operation. The team started monitoring their operation; and not quite long after, they pounced on another driver who was also in traffic and the team gave them a hot chase. One of them managed to escape by climbing a fence wall, but another suspect, whose name we have as Kofi Mensah was shot while attempting to jump the wall too,” DSP Tenge said.

The suspect after being hit by the bullet was rushed to the Police Hospital for treatment but has been discharged and handed over to the police.

This is the fifth time suspected robbers have been arrested on the stretch in one week, following several complaints of robbery attacks by road users.

Previous MPs move to check allegations against new cement factory near Panbros Salt
Next Gory accident at Sawla, one in critical condition