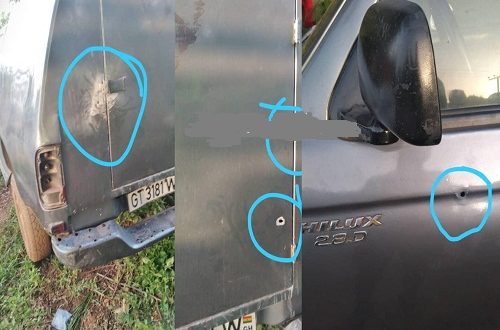 Lance Corporal Yussif Abubakar, a Policeman stationed at Tanoso District Headquarters in the Bono East Region has been shot by armed robbers while on escorting an Absa Bank bullion van.

Driver of the vehicle Frank Agyemang age 44 years and  Sampson Kofi Sarfo age 45 years  on special duty were also suffered gunshot wounds after they were attacked by the unmasked robbers numbering 8.

An amount of GHS638, 000 that was being transported on the van with registration number to Sunyani in the Bono Region  GT 3181- W  was taken away.

According to the police sources available to MyNewsGh.com, the robbers also took away an AK 47 service rifle Number AZ 5522 loaded with 19 rounds of ammunition together with Police body armour into the nearby bush and bolted.

The robbery victims were rushed to Holy Family Hospital in Techiman where they were treated and discharged while the bullion van was towed to the station and impounded for investigation.