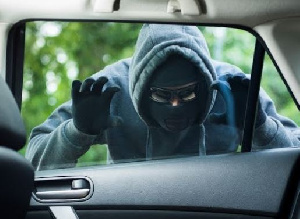 A community policing-oriented group in the Adansi South District, Ashanti region, has arrested a thug at Assin Praso.

The volunteer group christened Team Alex, led by one spirited Alex Donkoh, acted on a tip-off and apprehended the individual as part of efforts to help the police clamp down on criminal activities in the area.

The suspect, Appiah Domnic, widely known as Appiatus, was part of some 20 armed men who allegedly attacked and shot five people, including chiefs of Adansi Praso June 16th, 2022.

After going into hiding for three months, he returned and nicodemusly lodged in his brother-in-law’s house at Assin Praso, where he was arrested with the in-law because the latter is also a suspect.

Amid the interrogation, the parents of Appiah Dominic intervened and offered a bribe of GH¢7,000, which was later topped to GH¢10,000, to set the suspect free.

They, however, made an initial payment of GH¢2,000 cedis to cement their commitment which Mr Donkoh took but handed to the police for evidential purposes.

The two suspects and their parents are currently in the custody of the Obuasi Police Division pending investigation.

Alex Donkoh, in an interview with Angel FM’s Kwame Owusu Asante Shadrack, explained his motivation saying that Adansi Praso and Assin Praso are correlated such that if there is an eventuality in one community, it affects the other.

Citing attacks on Assin Praso residents as an example, he said the members of Adansi Praso are now apprehensive because they may fall victim to same.

“So we are doing putting in our best to ensure that the menace in the area ends,” he said

Meanwhile, unknown persons suspected to be part of thugs have clogged up the engine of the leader’s car with a yet-to-be-identified substance, leading to its breakdown.