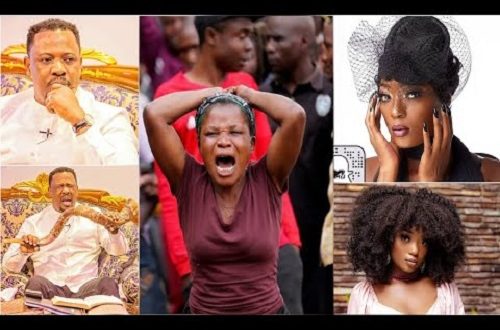 Prophet Nigel Gaisie returns strong with his works for God as he prophesies that God has revealed to him that Ghanaian singer Jane Awindor (Efya Nokturnal), will die.

After making such a bold statement on Tv, the man of God adviced Efya to see a seer to do something about the prophecy.

Not a lot has been heard from the man of God and leader of “True Word Prophetic Fire Ministry” after Hon. Kennedy Agyapong descended on his matter. Exposing his girlfriends and many other evil deeds.

Hon. Kennedy Agyapong and Kofi Annan have been on the tail of Rev. Obofour, Obinim, Kofi Oduro, Badu Kobi, and more alleging that they are false men of God deceiving innocent believers.

However, It seems Nigel Gaisie is ready for battle because he came out some few days ago just to dare Kennedy agyapong to arrest him if he has indeed committed any crime.

He pointed it out that the things said about him were mere allegations without evidence thereby rubbishing the claims of the MP.

Speaking on his TV station, he told the host that “the Lord appeared to him at dawn” with this revelation;

Further telling that he is not doing this for fame, he claims he has all the attention he can get already, so why follow matters like this anyway.

See in the video as the man of God share his prophecy.