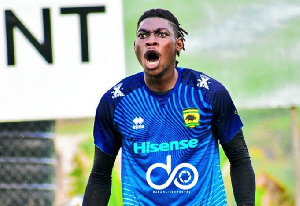 Asante Kotoko SC goalkeeper, Razak Abalora has reportedly completed his transfer to Moldavian side, Sheriff Tiraspol, pending an official announcement by the club.

Renowned Ghanaian journalist, Saddick Adams has confirmed that the deal is done with the player processing his documents. Abalora will pen a three-year deal that will run until 2025.

The former WAFA goalie held the record of most clean sheets kept in the Ghana Premier League (GPL) this season.

Abalora, following the deal, is now set to become the fourth Ghanaian to join the Moldovan first-tier side after Edmond Addo, Patrick Kpozo, and Abdul Basit Khalid who are all currently with the team.

Tiraspol will be playing the Europa League round of 32 after finishing third place in their Champions League group stage.

Previous Check: You may have unknowingly subscribed to these mobile services
Next VIDEO: Police interdict ‘drunken’ officer in viral video