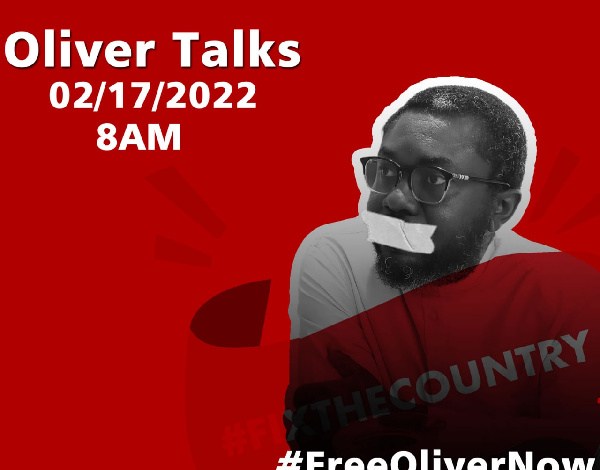 Pressure group, #FixTheCountry Movement have hinted that its detained convener, Oliver Barker-Vormawor will deliver a message to the group’s teeming supporters.

It will be recalled that the movement sounded alarm bells over the arrest of their convener on Friday, February 11.

According to the group, Mr. Barker-Vormawor was ‘abducted’ by state security agents when he touched down from the United Kingdom at the Kotoka International Airport (KIA).

Confirming his arrest in a statement, the Police said the lawyer and activist had been arrested in connection with a threat to stage a coup if the E-Levy is passed.

He was subsequently arraigned before the Ashaiman District Court on Monday, February 14, where he was slapped with a treason felony charge.

Barker-Vormawor was also remanded into police custody and is expected back in court on February 28.

In a tweet, #FixTheCountry Movement shared an image titled ‘Oliver Talks’ with the caption “It is late but we are excited to do this. Tomorrow [February 17, 2022] at 8 AM. Oliver has a message for You”.