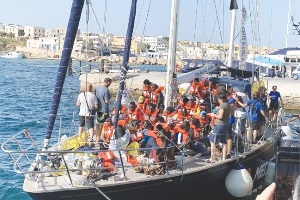 Rescue ship with nearly 300 migrants aboard docks in Sicily

After several days of waiting, the Ocean Viking rescue vessel has been allowed to dock in Sicily with 294 migrants on board.

The ship entered the port of Pozzallo on the southern tip of the Italian island on Monday morning. Some of the migrants, who were rescued in several operations, had already been on the ship for more than a week, as the vessel was waiting to be assigned a safe port.

On Sunday evening, the private organization SOS Mediterranee, which runs the ship, announced that the Ocean Viking was allowed to enter Pozzallo.

Thousands of migrants attempt the dangerous journey from the North African coast to the EU each year in search of a better life or having fled conflict or persecution. Time and again, some of them pay with their lives.

If they are picked up by a charity vessel, they often must wait days at sea for permission to dock by an EU country, often Italy.

Tags 300 aboard docks IN migrants NEARLY RESCUE SHIP Sicily WITH