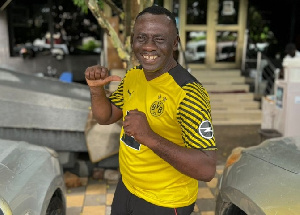 Television personality, Akwasi Boadi (Akrobeto) continues to enjoy global recognition in diverse ways. From having conversations with international media in a manner that cracks up viewers and the hosts to featuring on the social media pages of football clubs whose names have been butchered in his Real News presentation, the actor has become a global sensation.

Akrobeto is once again enjoying the spotlight – not because of his wit but his decision to wear the jersey of Borussia Dortmund, one of the most successful football clubs in Germany that plays in The German Premier League, known as ‘Bundesliga’.

On Monday, May 30, 2022, the club shared a photo of Akrobeto proudly wearing its jersey. The Ghanaian showbiz personality could be seen beaming with smiles as he stood in the middle of two cars at an unknown location. With a fist around his chest area as if to say ‘champions’, the actor who had an infectious smile, was indeed in his element.

“The newest Borussia Dortmund super fan, Uncle Akrobeto!” read the caption of the tweet of the football club whose colours are black and yellow.

The tweet, sighted by GhanaWeb, has ignited excitement in some Ghanaians as tweeps have been hailing Akrobeto. The club whose slogan is “Echte Liebe”, translated as “True Love”, has also been lauded for acknowledging Akrobeto.

It is not the first time Akrobeto has been featured on the Twitter page of the club. In October 2021, Borussia Dortmund shared a short video clip of Akrobeto announcing match fixtures.

Wow! Fascinating to see this, I must commend @BlackYellow for the love and support for we Ghanaians. From wishing us Independence Day to posting our very own filmmaker. This is just amazing. I love this team now! I am a fan now????

Akrobeto to the whole wiase Wati.