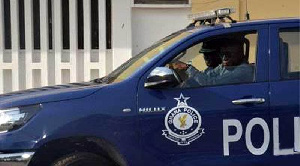 • The cars had been robbed the same evening they were abandoned

• They traced the car after a tip-off

Two luxurious cars suspected to have been stolen from their owners have been found in a bush by the Ashanti Regional command.

According to dailyguidenetwork.com, the incident happened at the outskirts of Aduman on Friday night.

A black-coloured unregistered Lexus RX350 and Matiz Jazz cars were retrieved after the police were tipped about a robbery of one of the vehicles – a Lexus RX350 at Buokrom Estate in Kumasi on Friday.

A police report indicated that two men, armed with a machete and gun, robbed the owner of the car around 11.30 pm on Friday.

A team of police officers from the Anti-Armed Robbery Unit, SWAT and Mamponteng patrols then followed up after the incident was reported, to help locate the stolen car and the robbers.

Having traced the cars with information from the police information room and with a tracking coordinate, the team realized the said car had been abandoned by the robbers, together with the Matiz Jazz car.

It was also realized that the DV number plate of the Lexus vehicle had been replaced with a vehicle registration number GW 2048-21.

Investigations are underway but the two vehicles have since been sent to the Ashanti Regional Police Command where the owner of the Lexus has identified his car.