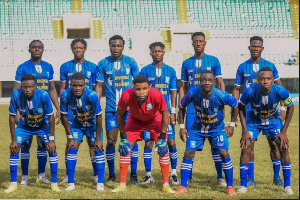 The newly-promoted club started the season on a good note beating Great Olympics at home but fell below the pecking order after a couple of matches.

In an interview with Starr FM, Sey Mubarak revealed that the club has recorded poor performance due to a lack of funds.

“When we started, we had enough resources at the beginning of the season. The players were paid every winning bonus and salaries from September to December and so they had enough motivation during that time.”

“There were a lot of attention from stakeholders who made donations and promised the players,” he said.

“From January, we started experiencing financial challenges and that really affected us because we had gone three matches without paying our players and that was when the troubles started. Our players were not motivated,” Sey Mubarak stated

Real Tamale United qualified for Ghana’s top-flight league after nine years by beating Unity FC 2-0 at the Aliu Mahama Stadium in Tamale to finish top of Division One League, Zone 1 with 65 points.

Previous German govt spent over €200,000 on my hospital bills, I would have died if I were in Ghana – Ghanaian claims
Next Covid-19: Wear your nose mask – GHS to Ghanaians