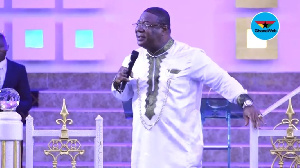 Founder of Action Chapel International, Archbishop Nicholas Duncan-Williams has stated that the ongoing Russia-Ukraine conflict should be a wake-up call to the African continent and its leaders.

According to him, the conflict shows that Africa is on its own even though Africa may think hat it has friends. He thus, wants peace and security to be prioritized at all times.

In a sermon on February 27, 2022, the Papa as he is also referred to, cautioned Ghana in particular, especially the politicians and members of the security agencies to pay attention to the “signs on the wall” and not “dare” or “ignore” them.

At the tail end of his second sermon, the Archbishop referenced the ongoing Russia-Ukraine conflict to make his point about how coming events always cast their shadows but only for those who look out for the relevant signs and take action.

“We must not ignore the signs. What is happening in Ukraine is a wake-up call to the world, to Africa and to the leaders of Africa that you are on your own. You think you have friends; you don’t have any friends, you are on your own and we must never compromise our security and our peace.

“We must never bluff and ignore the signs. They are written loud and clear. And never think that power and security and money is everything; they have their expiry dates. It’s a matter of time; things happen. May we not ignore the signs on the wall,” he stressed.

Russian President Vladimir Putin on February 24 ordered a military operation in Ukraine after it emerged that the country was seeking entry into the North Atlantic Treaty Organization – which Russia sees as against its security interests.

Russian forces have been in Ukraine trying to take control of the capital and second largest city – Kiev and Kharkiv respectively.

The resulting chaos has led to people fleeing their homes into neigbouring countries. A major issue that has come up is the racist mistreatment of Africans seeking to escape – it has been condemned by African countries and the AU.

Most African countries have started evacuating their nationals – mostly students – by having them cross land borders into neigbouring countries where they are given consular assistance.

Initial talks between the two warring parties took place on February 28, with a second-round taking place on March 3.

Relevant portion starts from 58th minute mark till the end