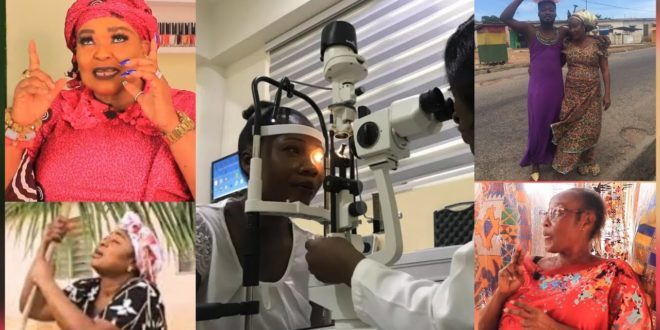 Veteran Ghanaian actress, Mavis Gyanewaa, known in the movie industry as Aunty May, has revealed her current predicament as a result of medical negligence.

Currently battling with a medical condition, Aunty May said she was treated for malaria in a hospital with three shots of injection which has since led to her being blind in one eye.

According to her, her vision immediately became hazy when she was administered the shots and has since had issues with her eyes.

“They tested me and said I had malaria so they will give me injections. I was given three injections on my buttocks and immediately my vision became dark. I complained and the nurse after confirming if I had eaten said I will be fine. But that is how my predicament started,” she told Theophilus Annan of Oman Channel.

According to her, despite a doctor’s confirmation that the injection caused her eye problems, the management of the clinic has refused to take responsibility for her situation.

“I went to them when it happened and one doctor confirmed that the injection had led to a blood formation in the back of my eyes… I went there again and they had taken my name from their computer,” she said.

“I went there with a lawyer but they had taken my name out of their records. Even though I had their card they could not trace my records. The nurse who gave me the injection had also been fired. One of the doctors told me they lost my records because of a system upgrade,” she said.

Aunty May disclosed that to save her other eye from also going blind, she currently has to go for an injection monthly at the Komfo Anokye Teaching Hospital.

According to Aunty May, it is always not easy footing the GHC3,400 cost of the injection and the other expenses that comes with her condition.

Mavis Gyanewaa has featured in various movies and TV series including ‘Cow and Chicken,’ a popular TV series.