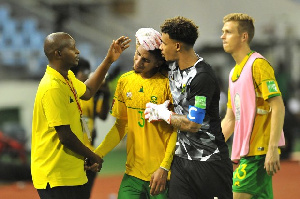 The ruling from FIFA is subject to an appeal

Former Bafana Bafana captain, Neil Tovey, has said that he knew the petition from the South African Football Association (SAFA) to FIFA on their game against the Black Stars was bound to fail.

SAFA after Ghana defeated the Bafana Bafana by a lone goal through a 34th-minute penalty goal of captain Andre Dede Ayew refused to accept defeat as they alleged that the referee internationally cheated them.

However, FIFA on Friday, December 3 rejected SAFA’s petition for a replay against the Black Stars and declared Ghana as the legitimate winner of the tie.

Reacting to the ruling from FIFA, Neil Tovey said he knew the petition will be thrown out because SAFA didn’t support it with any strong evidence.

“I told you, it’s very difficult to overturn a referee’s decision. Unless you can prove he has taken a bribe you will not get that decision in your favour.”

“It’s extremely difficult to get a ruling on the referee’s decision unless you can prove he has taken a bribe,” Tovey told Kickoff.com.

Source: www.ghanaweb.com
Related Topics:EVIDENCESAFA
Up Next