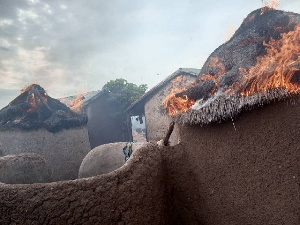 A community, within Chereponi in the North East Region, Sagong, has been burnt to the ground following renewed clashes between the Anufors and the Konkombas in the area.

The clash believed to be a result of a five-year conflict over a parcel of land which is located between Gbalo (an Anufor community) and Sagong (a Konkomba community) is alleged to have started around 3 pm on Monday, July 25, 2022.

Although no casualties have been recorded, members of the Sagong Community have been rendered homeless.

This comes barely days after Minister for the Interior, Ambrose Derry on Wednesday, July 20, 2022, by an Executive Instrument renewed the curfew hours for Chereponi Township and its environs in the North East Region from 10:00 pm to 4:00 am.

Meanwhile, there is a total ban on all persons in the aforementioned communities and their environs from carrying arms, ammunition or any offensive weapon, and any persons found with any arms or ammunition will be arrested and prosecuted.